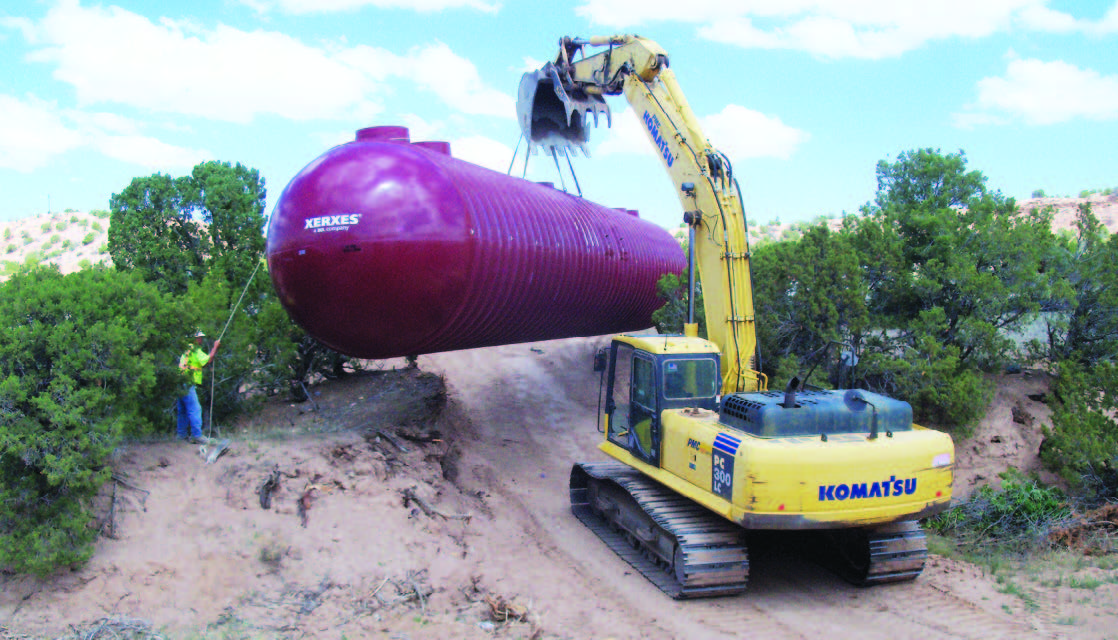 We were very pleased with final results produced by SMA and IWS. The project was expedited to protect public health, safety, and the environment without compromising quality or exceeding budget.

]IWS recently teamed with Souder, Miller and Associates (SMA) on a Design-Build approach to install an improved wastewater treatment system (WWTS) with the capacity to treat up to 30,000 GPD for the 132 home Tesuque Trailer Village owned and operated by the Pueblo of Tesuque located 10 miles north of Santa Fe, NM. The Design-Build contract with the Pueblo was to permit, design, construct, and start-up the WWTS, which is replacing three undersized and failing septic tanks and leach fields.The Pueblo of Tesuque is a member of the Eight Northern Pueblos and is from the Tewa speaking ethnic group of Native Americans. One of the most traditional of all the Tewa speaking Pueblos, the Tesuque have maintained their customs and traditions even though they have been in contact with outside cultures throughout much of their history. Archaeologists have determined that the Pueblo existed before 1200 A.D.

Tesuque Trailer Village consists of two main areas, the original area developed around 1960 and the new area developed in the mid-1980s. Infrastructure in the older area was in poor condition and water and sewer improvements to replace leaking and deteriorated water and sewer lines were conducted as a separate component of this project by SMA. The WWTS was designed and managed by Ewan Young, Peter Fant, P.E., Kari Edenfield, P.E. and Eric Tawney, P.E. of SMA to replace the existing system. The new system utilizes gravity collection to convey wastewater to two new underground fiberglass septic tanks of 35,000 and 40,000 gallons, respectively. From the septic tanks, effluent is pumped through a septic tank effluent pressure (STEP) system to an Advantex treatment facility which treats the wastewater and then disperses it through a low pressure disposal (LPD) field in multiple zones in rotation, so that between doses, each zone has ample time to drain. Additional treatment is attained in the LPD field as the discharge occurs within 18” of the surface, where the most biologically active soil layer is present.

The IWS scope of work included installing: a) 35,000 and 40,000 gallon STEP tanks; b) 1,360 ft of sewer force main to connect the STEP system to the WWTS; c) a 35,000 gallon recirculation tank; d) 12, AX-100 Advantex pods; e) a 20,000 gallon anoxic/dosing tank; and f) a Treatment Control Panel. The overall construction was substantially completed in 18 weeks. One of the concerns during the field work was making sure that all the archeological boundaries at the site were marked and respected during the field activities and to protect the archeological areas and  make sure all work occurred within the designated boundaries.

The Design-Build approach was a real benefit to the Pueblo by reducing he project cost and the overall schedule. Both SMA and IWS are experienced in executing onsite wastewater projects under a Design-Build contract. The Pueblo decided that Design-Build was preferable to Design-Bid-Build because they would only have to contract and communicate directly with one entity, SMA, and the project could be completed faster to address an urgent need to protect public health, safety, and the environment. The project was considered an emergency situation because of the failure of existing facilities and the potential for untreated wastewater discharge into the environment; threatening public health and safety. Failed septic tanks and leach field had led to backups under homes and significantly increased operation and maintenance costs for line cleaning and pumping.

Ramos Romero, Governor of Tesuque Pueblo, had foreseen what was needed to upgrade this facility in such a way that the problems regarding the environment and public safety would be addressed regardless of cost and is now satisfied with the final product, “We were very pleased with final results produced by SMA and IWS. The project was expedited to protect public health, safety, and the environment without compromising quality or exceeding budget. The Pueblo in conjunction with its partners were committed in upgrading this facility which just seemed a dream, but has now become a reality.”