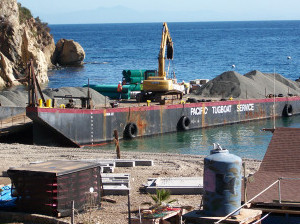 IWS did a remarkable job and executed the project without a hitch, especially given the logistical issues and complex construction configurations.

Camp Fox has been home to YMCA summer and weekend campers for more than 80 years and now is being operated by Guided Discoveries (www.guideddiscoveries.org) which hosts YMCA camps along with other experiential education programs and activities. The camp is undergoing an expansion to accommodate up to 400 campers and facility staff in support of year round programs. The wastewater treatment system was being upgraded to meet the infrastructure needs of the camp.

All of the treatment system components and associated materials had to be shipped from the Port of Long Beach to Camp Fox, which included: earth moving equipment (excavator, dozer, loader, backhoe); materials (rock, sand, cement); system equipment (15 fiberglass tanks ranging from 2,000 gal to 20,000 gal with associated concrete deadmen, 10 AX- 100 pods, and control panels); and miscellaneous materials (lumber, rebar, piping, conduit, wire, and fuel). Each barge took up to 1 day to load in Long Beach and then was towed by tugboat to Catalina Island on a 7 hour trip. Camp Fox is not accessible by road on Catalina Island so the barges had to make a beach landing at the camp and was then unloaded by IWS.

The 20,000 gallon per day treatment system was designed by Mark Strahm of Inland Foundation (www.inlandfoundation.com) and permitted by Los Angeles County. The system was designed to accommodate up to 400 campers and staff which is supported by a full service kitchen, rest room facilities, showers¸ and dormitory quarters. The existing system was composed of conventional septic tanks and leach fields. Modifications needed to be made to the collection and treatment system as wastewater was aggregated to a new central treatment area versus individual septic tank areas.

The collection system modifications included installing primary treatment tanks in new locations while utilizing some existing concrete septic tanks. The new and existing tanks were connected to new collection and distribution piping. Most of the new tank installation occurred in the “West” and “North” tank areas. The new treatment system design included fiberglass tanks for primary treatment followed by the Orenco Textile Filters (www.orenco.com) AX-100 pods for the secondary treatment. The effluent was disinfected utilizing chlorination.

Effluent dispersal was through 27,500 linear feet of Geoflow (www.geoflow.com) drip irrigation tubing IWS installed throughout multiple areas of the camp to support the irrigation of common areas which included the obstacle/rope course¸ open air sleeping area, camper housing, and the main exercise field outside the mess hall. The drip irrigation was installed utilizing a vibratory plow.

During the project, camp was not in session, but the camp personnel were in training and multiple contractors were working at the site (plumbing, electrical, landscaping, etc.). IWS took proper health and safety precautions during the work to maintain a safe work environment for all the workers and employees at the facility. IWS mobilized to the site in mid October and needed to have the system completed before camp started in February. The schedule was challenging given the scope of work and the impact from an especially heavy rainy season which started at the end of November.

The camp maintained a mess hall for all the camp staff, contractors, and IWS personnel and provided three great meals per day with all the snacks in between. The only access to Avalon, the largest town on the island, was by boat. IWS purchased a boat to transport IWS personnel and supplies during the project. Island fever was setting in as the 3.5 month project was concluding, but it was a truly beautiful site in an unbelievable setting. The IWS crew was able to experience migrating whales, dolphins, and some great fishing off the pier. IWS was fortunate to have been selected as part of the team for this unique project.Ralph Hoetger, Director of Construction for Guided Discoveries (operator of the camp) commented, “IWS did a remarkable job and executed the project without a hitch. Given the logistical issues and complex construction configurations, we were very pleased with IWS and would highly recommend them to other camps and facilities on the island and main land”.