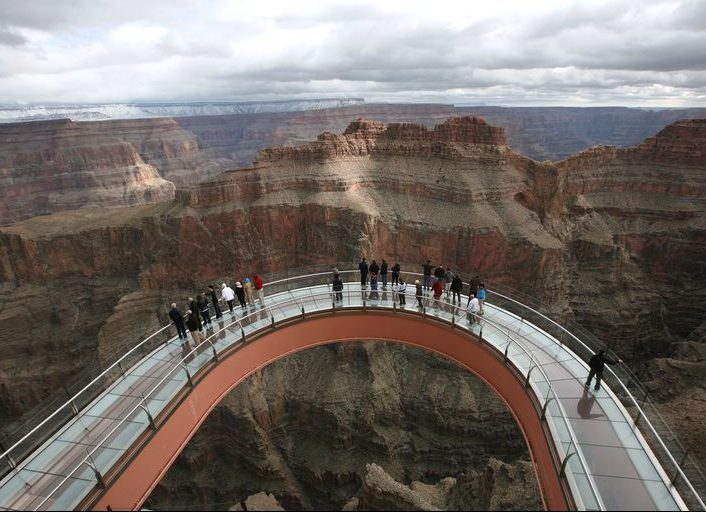 Up to 5,000 people per day visit the Canyon Skywalk attraction, about 120 miles southeast of Las Vegas on the southern rim of the Grand Canyon

In April 2009, IWS constructed an AdvanTex AX-100 treatment system for the Grand Canyon West Airport near Peach Springs, Arizona.  The project is owned and financed by the FAA in partnership with the Hualapai Nation.

Construction of the treatment system was challenging because the site consists of solid granite just below grade.  All excavations were blasted.  Additionally, IWS was under an extremely tight construction schedule due to other site improvements being constructed concurrently.

IWS teamed with Show Low Construction (Show Low), the general contractor, to construct the onsite wastewater facility being built as part of the expansion. The site geology was challenging, with two feet of top soil and then solid bedrock. Show Low provided the blasting services to enable IWS to set the tanks and run the interconnecting piping. Rock had to be blasted down to depths of 16 feet in some areas. Clint Neff, PM for Show Low, summed it up, “IWS was a valuable team partner and did a great job”.

The project schedule was extremely tight for the wastewater treatment system as there were other site improvements that were being constructed concurrently which put the wastewater system in the critical path. IWS mobilized and completed construction within 45 days onsite.

The treatment system was designed for a flow of 30,000 gallons per day and composed of the following: three, 25,000 gallon septic tanks; one 20,000 gallon recirculation tank; one 15,000 gallon dosing tank; twelve Orenco Advantex AX-100 treatment pods; and Geoflow drip disposal. Due to the bedrock conditions, the dispersal area was designed to take advantage of evapotransporation in the high desert environment.