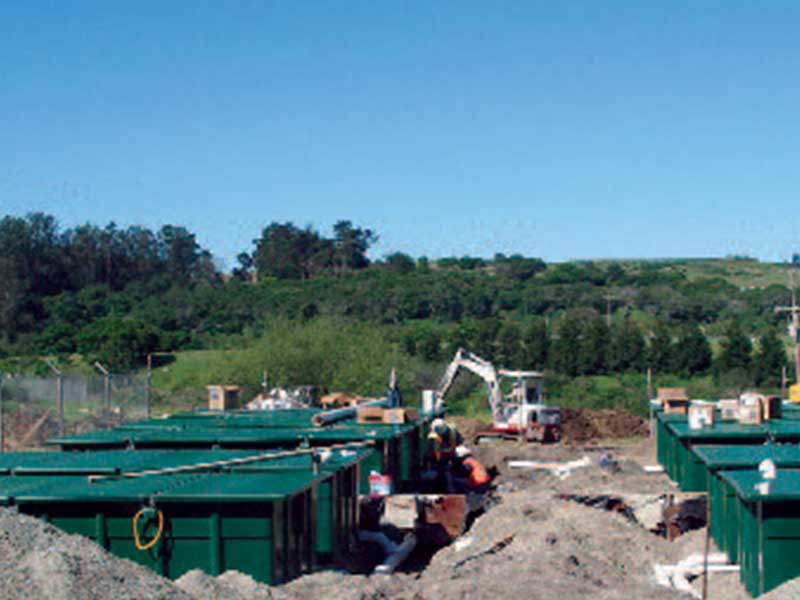 The Tierra Alta/Buena Vista Housing Center (operated by The Santa Cruz County Housing Authority) located in Watsonville, CA (20 miles south of San Jose) provides housing and family services for permanent and migrant workers in California’s Central Coast region. The facility had a 50,000 gallon per day Recirculating Sand Filter (RSF) that needed to be replaced after 15 years of successful service and the Owner wanted to complete the work between the end of the rainy season and the start of the 2010 growing year, which meant an accelerated schedule and short window to execute the project.

Design engineer, Dave Dauwalder of Nolte Associates, Inc., selected the Advantex AX-100 treatment pods as the replacement option for the existing RSF. After considering the costs of trying to rehabilitate the existing RSF or install new ones, it was more cost effective to use the Advantex option. In addition, the County of Santa Cruz and the Central Coast Regional Water Quality Control Board (CCRWQCB) was very comfortable with the technical approach. Mike Wademan, Nolte Associates, provided CCRWQCB Discharge Permit compliance coordination for the project.

At peak flow the facility generates 50,000 gpd, with an average flow of 25,000 gpd. This approach enabled the client to re-use the existing primary tanks, recirculation tanks, and dispersal system. The scope of work was limited to the installation of 10, AX-100 Advantex pods, the interconnecting piping and valves, and a new control panel. The Advantex pods were installed on less than 50% of the the existing RSF area, which saved space for the Owner.

Dave Dauwalder commented on the project schedule, “IWS worked well with the project team and accelerated the construction schedule by being proactive and anticipating issues in the field so that there were no construction delays.”