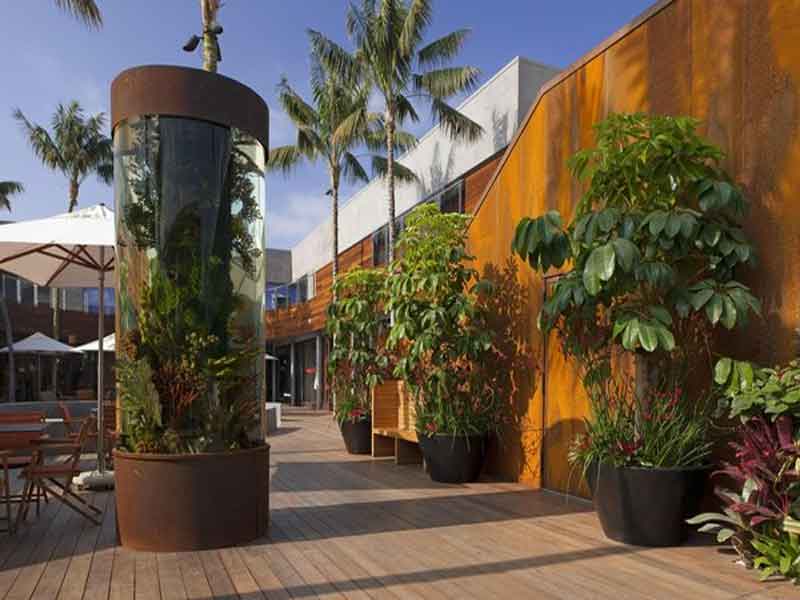 IWS was selected not only because of their reputation for quality work but also because of their success in completing similar projects in the area. This project was a confirmation of IWS ability to perform

High Profile Project
The former Malibu Lumber Yard has been transformed from a building supply business to a high-end commercial complex, with environmental sensitivity as the watchword during the centers planning and construction. Located on 2.7 acres at the intersection of Cross Creek Road and Pacific Coast Highway in Malibu, CA, the two story open air complex has 30,000 ft2 of retail space and was designed with eco-conscious materials which include low flow faucets and toilets, water wise landscaping, and decomposed granite driveways. The onsite wastewater system has been designed to produce Title 22 water quality and meet very stringent subsurface discharge requirements – maybe the most stringent in the State of California for an onsite system of its size. Malibu Experience Critical for IWS IWS was selected by the Developers (longtime Malibu residents Richard Weintraub and Richard Sperber) and their General Contractor, Matt Construction (Santa Fe Springs, CA), to construct the system which included equalization tanks, a state-of-the-art Siemens Membrane Bioreactor (MBR) system, and an extensive drip irrigation dispersal system. IWS has constructed a number of high profile onsite wastewater treatment systems in Malibu and was well qualified to meet the challenges for the Malibu Lumber Yard project.Project Challenges
The Lumber Yard project was complex and required dealing with a number of variables to ensure success which included: a) the first Siemens MBR system constructed below grade (due to space limitations) worldwide; b) due to tight site conditions and schedule constraints, IWS installed the concrete vaults first and then installed the MBR components later in the project when they arrived at the site; c) there were changes to the equipment specified during the construction phase of the project; d) the site required dewatering and treating millions of gallons of groundwater before being discharged; e) extensive shoring to secure the deep excavations for the tanks and treatment equipment; and f) there were numerous trades working at the site in tight conditions which required coordination and timing to keep the overall project moving forward.

Unique Total Nitrogen Limits
Malibu Lumber site is located in the “Civic Center Area” of Malibu which has been declared an environmentally sensitive area by the EPA and the Los Angeles Regional Water Quality Control Board (LARWQCB). Although the drinking water limits for Total Nitrogen are 10 mg/l, the limits for the discharge from the system were set by the LARWQCB at 3 mg/l Total Nitrogen, which may be the lowest Total Nitrogen limit for an onsite wastewater treatment system in the State of California. In addition, the effluent had to meet Title 22 requirements, which is the level of treatment required in California for water that may come in contact with humans. These very stringent discharge limits required an MBR treatment technology and sophisticated control system and instrumentation. The system selected for this project was Siemens Water Technologies Corp, based in Warrendale, PA.

Team Effort
The complexity of the project and tight schedule required cooperation and a team effort of various professionals. Matt Construction (Matt) was the General Contractor for the retailcente r and IWS worked closely with the Matt team on all aspects of the wastewater system. Dewatering was a critical aspect of the project due to shallow groundwater at the site, with several million gallons of groundwater having to be pumped and treated before being disposed of under an NPDES permit in the Malibu Lagoon. IWS teamed with Jerry King (CEO) of Hydroquip to provide the dewatering services which included the NPDES permit, pump test, and pump down of the groundwater. Jim Osborne (Principal) and Michael Slaby (Principal) of Pure Effect provided the treatment system and sampling/analytical support to treat the groundwater before being discharged under the NPDES permit.
Due to the nature of the project and permitting environment, there were changes to the plans during the course of the project which required close coordination with the design engineer for the project, John Yaroslaski, PE of Ensitu Engineering of Morro Bay, California. Reflecting on the project Yaroslaski said “IWS was proactive in raising constructability issues and anticipating potential concerns. Due to the schedule, we were in constant communication with IWS and had a great working relationship. We would highly recommend IWS to construct our future systems”.

System Design
The wastewater treatment system was designed and permitted to comply with both Regional Water Quality Control Board requirements as well as City of Malibu Dept of Env. Health requirements. The system, designed by Ensitu Engineering, in Morro Bay California, was one of the first MBR installed in Malibu and the very first to be designed and installed below grade. Siemens Corp Application Engineer Nathan Anntoneau, Project Manager Ken Childre as well their entire technical team worked closely with IWS and the Ensitu design team and was critical in getting the design completed and the system tested and up and running. Ken Childre, Siemens Project Manager, said ”IWS worked closely with Siemens and their experience with other installations in the Malibu area was a valuable asset to the design and construction team”. The system also includes more than 40,000 lineal feet of Geoflow drip tubing configured in 10 drip dispersal zones with automated controls.

Accelerated Schedule
As the permit and discharge requirements were resolved, the final design of the treatment system needed to be modified to meet final treatment objectives. IWS worked closely with Ensitu, Malibu Lumber LLC (Project Manager Brett Thornton), and Matt in supporting the design process by doing constructability reviews and various cost models. By working closely during the final design process, the team was able to make adjustments to schedule and construction requirements. This communication allowed the retail facility to open on schedule and have the treatment system perform in accordance with both the design and permit requirements.

Successful Project
The project was a success for all the stakeholders and was completed on schedule. Dick Miller, V. P. at Matt Const. summed it up, “IWS was selected not only because of their reputation for quality work but also because of their success in completing similar projects in the area. This project was a confirmation of IWS ability to perform”.For more information, contact the editor, Peter C. Balas,